In the past decade or two, writing about the human body has become a flourishing industry in the social sciences and humanities. A rich literature has accumulated on the Body and Society, including on the male body, and the religious body. The current article joins this research tradition.

Recently, a number of important texts about the traditional Jewish body have been published, and they provide the basis for my work. However, my study differs from them, complements them, and goes beyond them: firstly, I focus on a Jewish sub-group, a defined religious sector whose body has not yet been discussed. Secondly, my work focuses on contemporary reality, and describes bodily trends that are developing even as I am writing.And finally, this study is based on sociological-anthropological “field research”, mainly interviews and observations.

Moreover, works on the Jew’s body usually discuss sacred texts and historical evidence, referring to a more or less official Jewish legacy and classic perceptions of the Jewish body. In contrast, the material presented here deals with bodily behavior in action. I do not touch on written traditions and customs – halachic and mythical materials, rabbinical or kabbalistic sources – except when mentioned by the subjects themselves in dialogue with one another or in conversation with me as significant anchors in explaining contemporary bodily practices.

Haredi society is a novel generic phenomenon that differs from other Jewish societies, including those that preceded it, even though it is commonly seen as their true descendent, and despite its self-perception as their most faithful heir. The Haredim diverge from traditional Jews of the early and late Middle Ages, and even from the diversity of religious Jews in the modern era; moreover, they are clearly to be distinguished from the more or less secular Jews in Israel.

Accordingly, this work assumes that the Haredi body is a unique and unprecedented phenomenon. I find that this body is idiosyncratic, and distinguished not only from the Zionist body and its contemporary incarnations, but also from the orthodox body of recent generations.

However, the Haredi body is undergoing a rapid transformation. The opportunity to record crucial elements of the “original” phenomenon has already been missed. What remains to be observed may have the status of remnants, an intermediary stage, and a merely temporary reality. Some things are disappearing in front of our eyes, and will surely soon vanish from the world; hence the importance of documenting them today, and the feeling of urgency that accompanied this research.

Of course, there is no one, monolithic, fixed Jewish body. Even if at a given time there is a hegemonic body, there are always other bodies that ensure diversity, mutuality or competition. Furthermore, the body develops over time, sometimes changing drastically. The Jewish body is always positioned in relation to another body, mostly in confrontation. The Haredi body should be examined both in terms of its affinity to the traditional and orthodox bodies from which it came, and also from the point of view of its relationship with the contemporary Israeli body.

Despite efforts made by the radical orthodox community to isolate itself from its modern secular environment, there is nonetheless unpreventable contact between the two neighboring Jewish cultures in Israel. The bodies representative of these two cultures have met in the past, and today the encounter between them is extremely intensive and fertile. Until quite recently, relationships between the Haredi and Israeli bodies were characterized mainly by contrast and conflict. Recently, the two bodies have become closer and somewhat more similar.

This change stems from transformations undergone by the Israeli body, but also reflects upheavals in the Haredi body. This transformation is another instance of the “Israelization” of the Haredim. This research, parts of which are presented below, concerns the late versions of the old Haredi body, and the early buds of a new one. 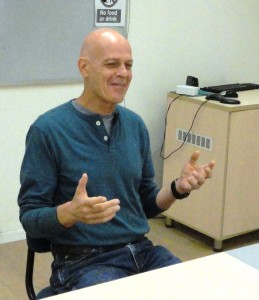 The following comments do not refer to Haredim in general, but only to those in Israel, and of them only Ashkenazi men, mostly from the radical hardcore of the Haredi world. The body of the New Haredim whose adaptability and assimilation into the environment are notable and widely recognized, such as the American, the Shasnik, or the bourgeois, who we meet in the newly built urban neighborhoods, the shopping mall or swimming pool, will not be discussed here. Nonetheless, I am attempting to locate patterns whose applicability goes beyond differences between various groups and sub-groups within the sector.

This research is based on fieldwork conducted during 2000-1 in north Jerusalem (Makor Baruch, Geulah, Bucharim, Beit Yisrael and Meah Shearim), with people from a range of communities, mainly the Eda Haredit and proximate marginal groups, in particular Toldot Aharon and Dushinski.

To conclude this preface I would like to make two methodological notes:

Taken from “Denial Does Not Make The Haredi Body Go Away Ethnography of a Disappearing (?) Jewish Phenomenon”, By Prof. Gideon Aran